The website has six main pages. Select from the list above ENGLISH below provides a condensed description of the Jo-Jo concept. A fuller description can be found on the JO-JO CONCEPT page. We try to briefly describe the positive consequences for society of the Jo-Jo concept on the page SOCIETY. We also want to report NEWS about the Jo-Jo concept, meetings, projects and news articles. Separate partial explanations can be found on the FAQ page and its sub pages. On the last page FOUNDATION & CONTACT we inform about the completely non-profit fundraising foundation Jo-Jo Tåg and how you can contribute to the realization of the Jo-Jo concept. With financial support and help from you with knowledge and competence, we can establish good technology and create a good future society. We create a society with a balance between city and country and good lives in long-term harmony with our environment.

City and country in balance. 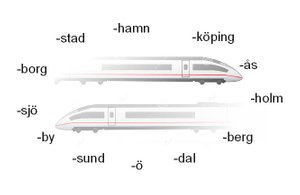 Transport of people and goods by rail has little environmental impact.

Any place you want can be connected

without affecting the travel times of other places.

The Jo-Jo concept consists of Jo-Jo trains, Jo-Jo-han and Jo-Jo houses. Jo-Jo trains are both passenger trains and freight trains. The train has a power shuttle with energy storage and the opportunity to take electric power from above. The trains have shuttles (motor cars, rail buses), which can also get power from their batteries. Jo-Jo-han (high access network) is the completely separate new infrastructure that the trains run on. The tracks are laid on pillars. The main line is built above the motorway. Jo-Jo-hus (high utility station) is the railway station itself where individual shuttles arrive and depart one floor up. An elevator allows travelers to step on and off the ground floor. The most important results achieved are that:

The traveler travels directly from his departure to his final station, without intermediate stops. Stockholm - Malmö 600 kilometers in 2 hours and 30 minutes. Passenger shuttles dock with the train running at full speed, but their relative speed at the docking is only 1 - 2 kilometers per hour. The stations are connected to the main line by connecting lines. At the main line the Jo-Jo trains run continuously at 245 kilometers per hour.

2. The train frequency is high

All Jo-Jo trains dock shuttles from / to all stations. With gears without moving parts, trains on the main line can be close together. With e.g. six minutes apart, at 245 kilometers per hour, there will be 24.5 kilometers between the trains. A passive gear is always right. The choice to take the siding in the switch is made actively in the railway vehicle. The technology with a gear without moving parts is well known but only modestly applied. It provides a passive infrastructure, but more technology in the vehicles. With a completely new separate infrastructure, it can be applied and then provides many benefits. High frequency is better than few and long trains.

3. There are many stations

Taking the siding from the main track to a connection track can be done with down to only a few kilometers distance between the railway switches. The number of possible stations is almost unlimited. Regardless of the distance to the main line, all places that want to have a station can be connected to Jo-Jo-han, without it affecting the travel time to / from other places.

4. Jo-Jo trains are both freight trains and passenger trains

As soon as a cargo shuttle (shuttle for goods, cf. truck) is reasonably loaded, it can be sent to the main line and then docked at the front of the train. Before changing to their final destination, the shuttle is docked from in front of and behind the existing shuttle in the train. The cargo shuttle goes directly from its departure station to its terminus. Passenger shuttles have a front and stern adapted for docking with free movement for traveling between the shuttles. They are docked at the rear of the train and depending on the traffic situation, they are docked at the rear or from inside the train. The journey takes place non-stop from departure to final station.

5. The capacity for travelers and goods can be quickly adjusted

Since the Jo-Jo train does not have a fixed length, it is easy to adjust the number of shuttles in the train. Everyone and everything must always follow - a postulate.

6. We get central station locations in all locations

A shuttle is only 24 meters long and the track is located on a bridge. The station has two levels and it is therefore very small. The station can often be located at the existing travel center. Into the city, the urban area, the shuttle can run slowly. With a turntable we can easily make a sack station. The same route in and out of the urban area.

7. Jo-Jo-han is built quickly at low cost and is put into operation in stages

The track is built on prefabricated bridge elements. We own the highway and the archeology, geology and noise have already been investigated. The ground is reinforced and the construction road is available. Fast, cost-effective and environmentally friendly. 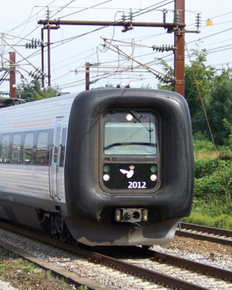 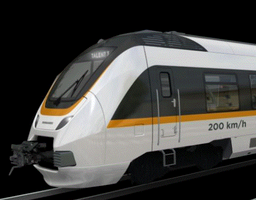 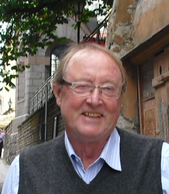 I'm not a railway expert, and I do not blame anyone and the responsibility for the content is entirely my own. Texts here on the website do not constitute scientific text. Source references are often missing. A lot of information has been obtained from websites online. ALMI Östergötland has paid for several information searches. Knowledgeable people at the Swedish Transport Administration have answered questions, but it is my interpretation of their answers that is here. The same goes for industrialists and professors in different disciplines that I have asked. The friend and innovation researcher Charles Edquist, Professor Emeritus, has presented the idea to the Prime Minister's National Innovation Council, and together we have made a presentation at the Government Offices. Philosophy professor emeritus Ingvar Johansson has "forced" me to increased precision and for the layman clearer explanations. My brother Olle has been / is an invaluable and active support and sounding board. Thank you all!

The GDPR is based on EU directives that aim to protect private individuals against their personal privacy being violated when personal data is processed. This website, www.jo-jotrain.se, does not collect any information about, or from the person who visits the website. This website does not in any way use so-called cookies.

If that is to happen, we need an editor,

an opportunity for you to participate and engage.